While the independence related protests continue in Barcelona, their number and attendance is very much reduced. This is a short set of film images taken at night at a protest in support of the politicians and independence group leaders currently on remand in Madrid following their unilateral declaration of Catalan independence.

The intention was to include images from two further scheduled demonstrations, but both appeared to have been cancelled. For the first time in nearly two months Barcelona has passed a full week without police helicopters seemingly permanently on station over the city center.

There are several good reasons why the protests are waning, not least because it is difficult to repeatedly protest against things which are somewhat abstract and which do not directly and immediately affect peoples lives.

The imposition of Article 155 of the Spanish constitution to suspend autonomous rule in Catalunya caused a lot of concern prior to its imposition, but for most people it has no practical consequences. Furthermore, once the new Catalan regional government elections are held on the 21st December, Article 155 will be automatically lifted.

Most protest has instead focussed on the arrest of Catalan politicians for breaking the law. Assemblea and Òmnium try to frame this as detention for “political views” (the “presos polítics”) and as an act of an authoritarian and fascist state that they regard still as fundamentally Francoist. However, almost the entire international community disagrees, viewing the unilateral attempt to break apart Spain as something rather more serious than the response of the Spanish state.

Without external validation and with the absence of any repetition of the police violence on 1st October,  it is very difficult to motivate continuous protest.

A “Free the Political Prisoners” banner now hangs over the entrance of mayor Ada Colau’s City Council building. Barcelona en Comù has just broken its coalition pact with the PSC as a result of the political tensions, leaving the city without an effective government.

It seems probable that the demonstrations and strikes will remain diminished until the election campaigns start in December. This will be a very rough political battle, with polls suggesting that voting intentions are almost completely unchanged and the likely result being a Catalan government with the same slim secessionist majority that has led to the current crisis. There is therefore a serious risk of recent events simply repeating in the new year, although support for unilateral independence (currently placed at around 45%) may drop significantly as the economic damage to the region starts to touch voters personally.

Lastly, the decision for the relocation of the European Medicines Agency is due to be made later today. Barcelona was perhaps the leading candidate for this prestigious organisation, but its bid is now regarded as fatally damaged thanks to the unstable political situation – a situation that could result in Catalunya ceasing to be a member of the EU. A sole banner in support of Barcelona’s EMA bid was on display in Plaça Sant Jaume, but even the banner holders were downbeat about Barcelona’s prospects. 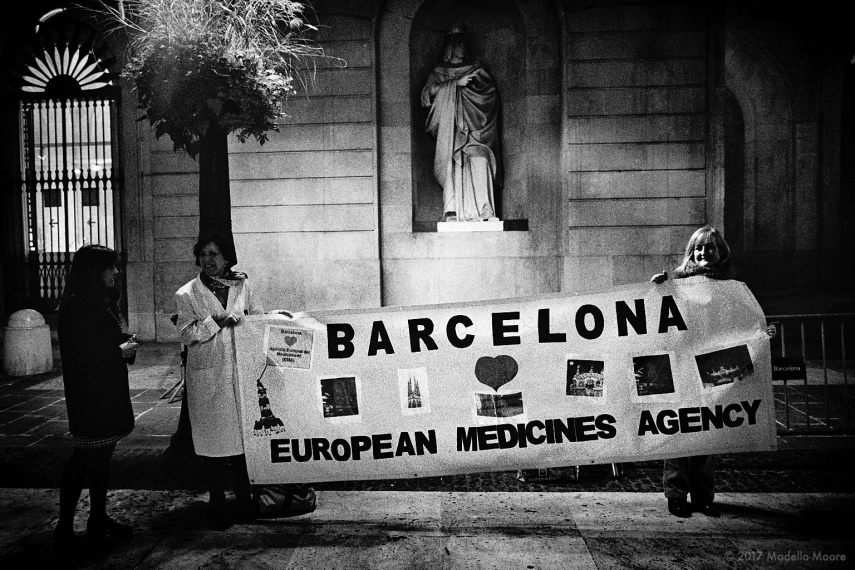 Support for the EMA relocation to Barcelona

All images were shot on Ilford Delta 400 and push processed to EI3200 in DDX. This is a stop more than I am comfortable with, as the negatives become very grainy and contrasty. But even at EI3200 the lighting in Plaça Sant Jaume is so dim that exposures at f2 were often around 1/4 or 1/8th second.