“Free the Political Prisoners – We are a Republic”, Plaça Sant Jaume, Barcelona

More independence movement images from Barcelona. Since the last update, the level of protest activity has subsided significantly, with all the protests shown here organised by Assemblea/Òmnium in support of the independence movement – but with turnouts significantly smaller than in previous weeks.Politically, the most significant recent events have resulted from the Spanish government’s invocation of Article 155 to suspend Catalan autonomous governance pending new elections on the 21st December. When this was announced, Carles Puigdemont and several members of the government fled to Belgium, while the remaining senior government members were arrested and charged with a range of offences including sedition, rebellion and mis-use of public funds (the latter including a claim that 6.2 million euros were diverted from the health budget to pro-independence campaign groups such as Òmnium).

In part because of Puigdemont’s flight, the majority of those detained by the court have been refused bail and are now being held in jail pending trial. This has led to an amplification of the Assemblea/Òmnium campaign to brand those currently on remand as “political prisoners”, with small demonstrations of a few thousand people organised periodically in central Barcelona around this theme. The most radical of these involved the support of Anonymous and a call to cover the entire city in posters:

As always, these events are extremely well organised. Scaffolded platforms are constructed to give the members of the media privileged vantage points of the events, and an emphasis is made on attracting as much foreign media coverage as possible.

Obtaining international support for the Catalan independence movement is seen as a key prerequisite for the independence movement to succeed, yet so far there is no indication of support either from the European Union, nor from any third country. Significant efforts have been made to appeal for support, including a number of emotional propaganda videos that aim to portray Spain as a fascist dictatorship against a pacifist and oppressed Catalan people. The difficulty is that this is a gross distortion of reality, and hopes that the numerous protests would provoke more scenes of violence between Catalans and the national police have not materialised. Without conflict, Catalunya’s claim to be an oppressed nation falls apart. 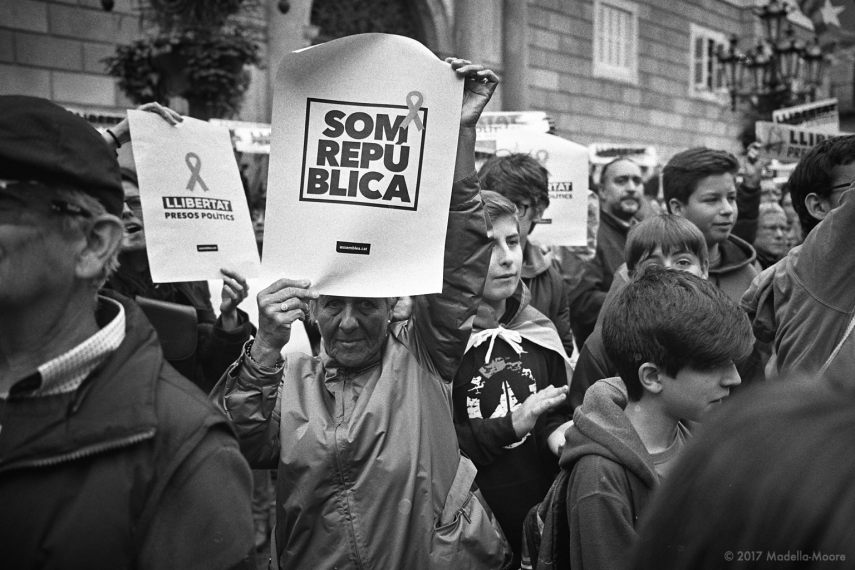 “We are a Republic”, Plaça Sant Jaume, Barcelona.

Frustration with the European Union’s refusal to intervene is growing within the independence movement, as without continued membership of the EU an independent Catalunya would be completely unviable. Perhaps because of such realisations, support for the seemingly unending series of marches and demonstrations is waning.

Last Saturday saw an attempt to stage a massive protest in support of those Catalan officials that have been arrested. The organisers intended this to be larger than the traditional “Diada” gathering, yet the turnout was comparatively low. The official figures claim that 750 thousand people attended, but as numerous commentators have observed this would be physically impossible given the area occupied by the crowds in aerial photographs. A more realistic number is probably less than half of the official count – still a lot of people but a fraction of the size of some demonstrations in previous weeks.

Oh no, not another march to attend… People walking to a protest march, Parc de la Ciutadella, Barcelona. 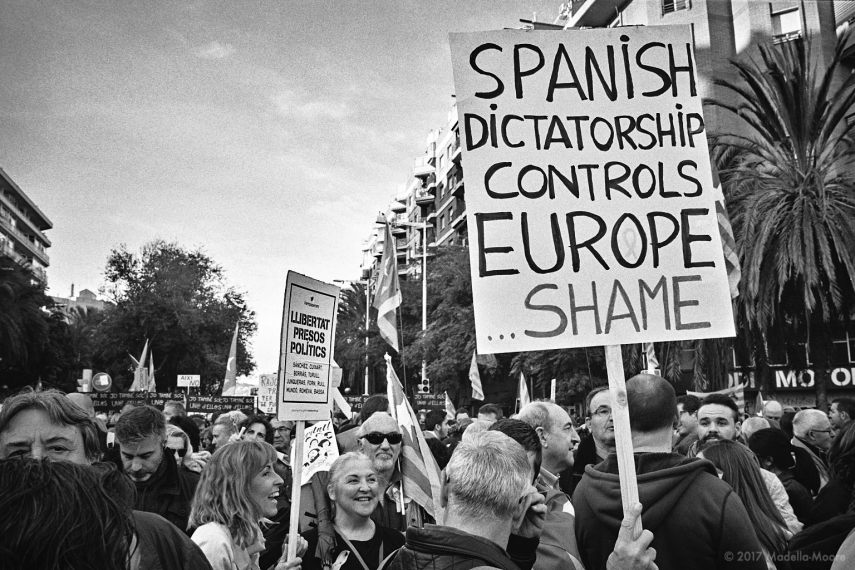 My impression is that the independence movement is, for the moment, rapidly loosing momentum. Protest fatigue is setting in, as is frustration with the disruptions to normal life that the demonstrations are causing.

And with the political uncertainty resulting in a failing economy and more than 2000 company relocations away from the region, people’s thoughts are starting to turn to rather more pragmatic financial concerns.