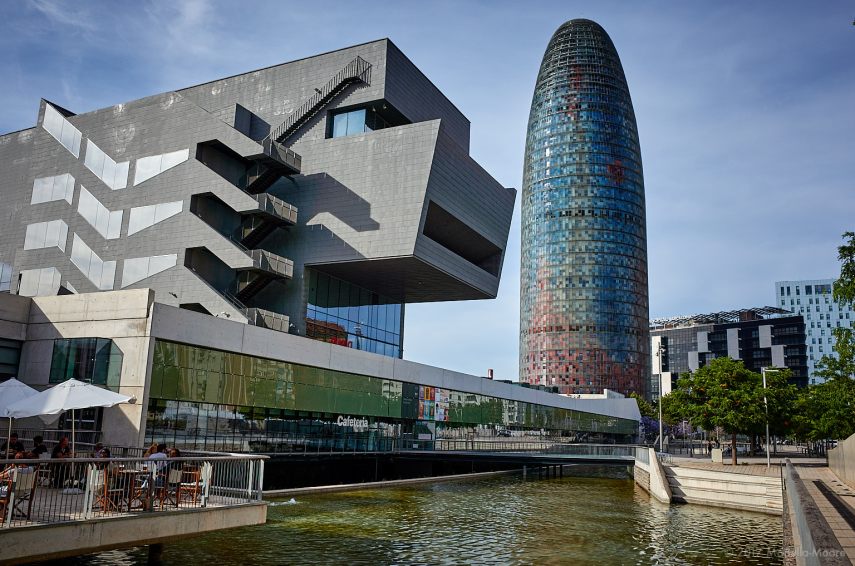 One of the consequences of the UK’s decision to leave the European Union is that it will no longer maintain several key European agencies that are currently located in London. A bidding process has started where cities throughout Europe campaign to host the relocated agencies, with the last nominations on the 31st July and the final decision taken in November 2017.

Barcelona is bidding to host the displaced European Medicines Agency (EMA) in the iconic Torre Glòries – a radical change from its current location in Canary Wharf for the approximately 900 staff that will be affected. 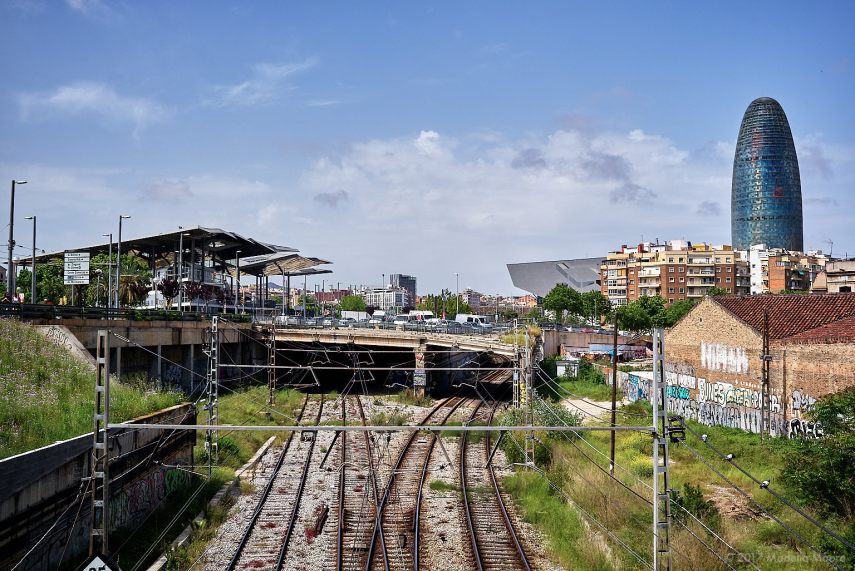 Torre Glòries alongside Disseny Hub and the Mercat d’ Encants. The area has excellent road, rail, bus and tram connections.

Barcelona is an attractive location for a number of reasons. The city has a significant international reputation for leading research in medicine and the proposed location is alongside the newly developed extensions of the Universitat Pompeu Fabra as well as numerous other Barcelona and Catalan based academic institutions.

The area is also part of the strategically important @22 development, which is supporting new knowledge and innovation based industries and which includes facilities such as the CCIB convention centre. The development of this zone and the attraction of groups such as the EMA are fundamental to Barcelona’s struggle to reduce its dependence on mass low-cost tourism. 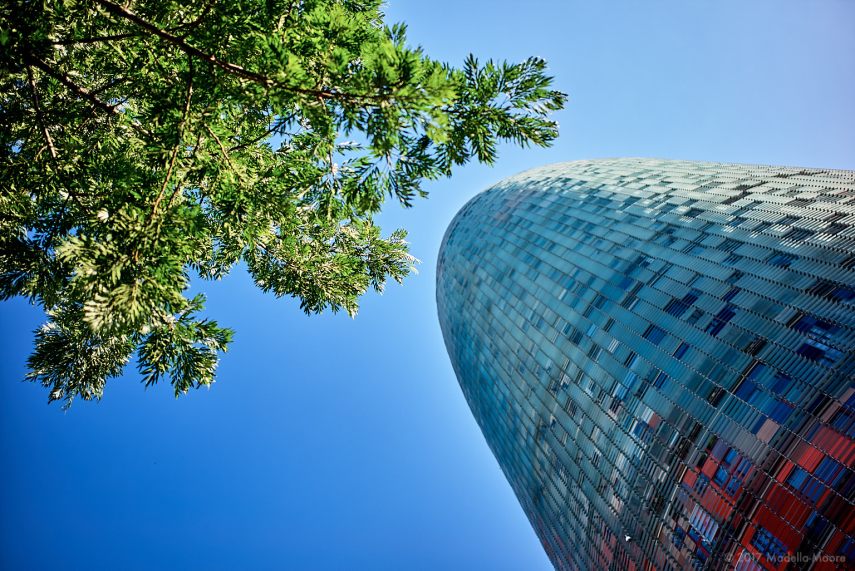 Torre Glòries, seen from below.

The area are around Torre Glòries is, on paper, an excellent place in which to live or work.

Although relatively central, it is far enough from the main tourist areas of the Ciutat Vella to be comparatively quiet and, unlike Canary Wharf, there are surrounding residential neighbourhoods where you can live without suffering either the commute or the insane property costs of Central London.

The area also has excellent transport links, whether by road, rail, bus, tram or bicycle – and of course the city is well served internationally by the airport at El Prat and high-speed rail links to neighbouring France. 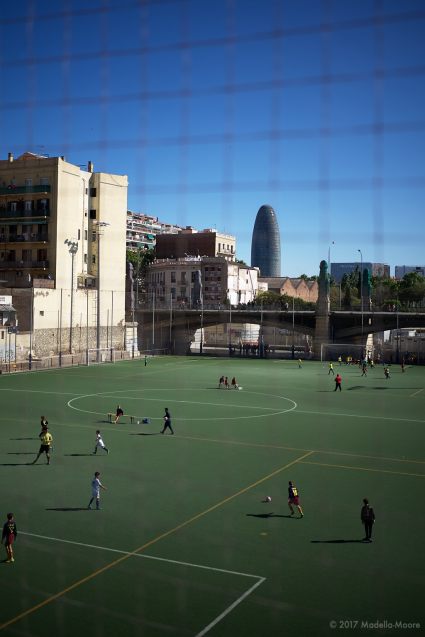 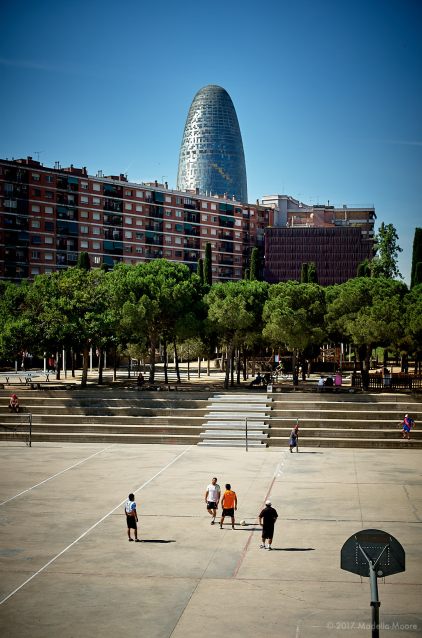 Torre Glòries, seen from the Parc del Clot, Barcelona. If everyone seems to be playing football around the tower, that might be because the tower’s default colours are those of FC Barcelona…

But unfortunately, one of the issues that the city will need to address if it is serious about the EMA application is the level of crime.

This ranges from the nearby illegal markets through to slum-dwellings to the associated and more serious problems of robbery, house occupation and drug dealing.

Despite protests from local residents, the city council has failed to take any effective action to address these problems, and there is no indication that this will change when the final park is complete. In fact, over the last year it would appear that the scale of the problem – evidenced from the size of the illegal markets – is increasing significantly. 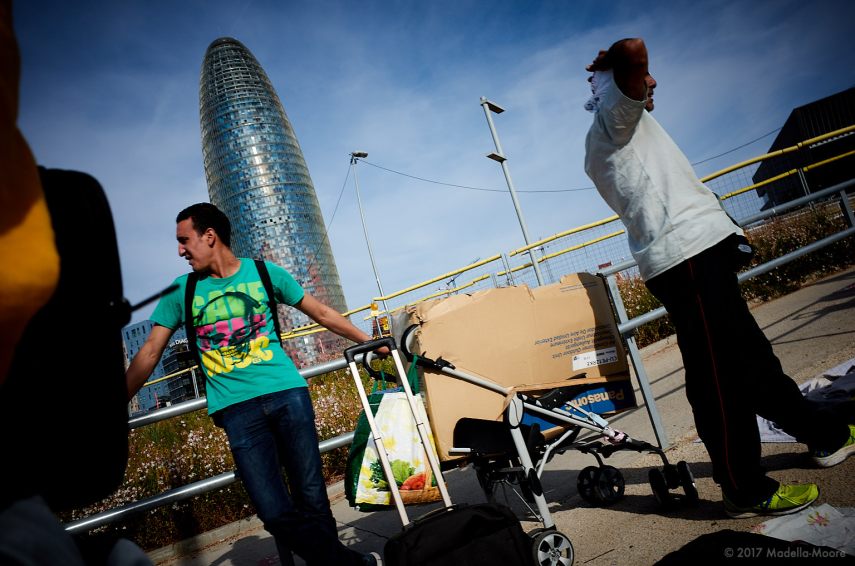 The Glòries square itself (Plaça de les Glòries Catalanes – literally the “Square of Catalan Glories”) is currently undergoing a controversial and expensive redevelopment.

Since the 1990’s the area was dominated by a huge elevated circular road junction. This was recently demolished and work was started to move the remaining roads underground with an ambitious tunnel system that weaves its way between the existing underground railway networks. The intention is to convert the square in to a large park to improve both local living conditions and to ameliorate pollution in the city.

Unfortunately, as is often the case for complex underground projects, the work is late and significantly over budget. Furthermore, the project is unpopular with the current Barcelona En Comú administration who regard it as a “Pharaonic” monument to their predecessors which was also tainted by corruption. Work on the project is currently suspended and the contract with the original company terminated due to the rising costs.

It is hoped that development will resume shortly, albeit with a reduced scope, new contractors, and the addition of dense social housing that, unfortunately, will diminish the area of what is one of  preciously few large public spaces in the city. Whatever the final result, it is essential that the project be completed and that it does not become another permanently suspended construction site, such as that at La Sagrera.

But the main issue affecting the potential EMA relocation to Barcelona may be more fundamental. Namely politics.

Torre Glòries up close, Barcelona. The glass slats are adjusted automatically to reduce the need for air-conditioning.

Lastly, Catalunya is following a path towards a unilateral declaration of independence from Spain. The regional government has announced that a binding referendum will be held on the 1st October 2017, and if the result is in favour of independence, Catalunya will formally declare independence within 48 hours.

There are any number of problems with this, not least because under the Spanish constitution and law any such referendum will be illegal and will therefore not be recognised by Spain. The governing right-wing prime minister, Mariano Rajoy, has vowed that the referendum will not take place. Meanwhile the Generalitat de Catalunya is proceeding as if there is no issue – most recently passing a law to enable the creation of a dedicated Catalan inland revenue (hisenda).

What will happen is currently anyone’s guess. Should a vote for independence be won, the current train-wreck that is Brexit Britain provides a strong hint as to the practical issues – but the conflict with Spain adds an entirely new level of unpredictability and chaos. At best, there will be a lot of political confusion and uncertainty. At worst, Catalunya will split from Spain and crash out from the European Union – which of course would mean that it could no longer host the EMA.

Either way, it seems very unlikely that any political analysis would consider Catalunya a safe or stable location for the agency – and the reason for that lies solely with the regional and local politicians.

Update 20th November 2017 – the EU has now taken its decision, and the EMA will be relocated to Amsterdam. Barcelona did not even make it through the first voting round, and although the reasons remain confidential it is clear that the massive political instability and near continuous mass protests of the last two months were fundamentally the main issue affecting the bid.