This is the first of an occasional series of photo essays on Brexit, looking at the potential winners and losers as the UK proceeds to leave its closest economic and political partners.

Gibraltar occupies a difficult political space, resulting from its history, geographic location, and its status as being both part of and yet distinct from the United Kingdom. Its population is densely packed into an area of less than 7km2, overlooked by the large limestone outcrop that gives the area its nickname. 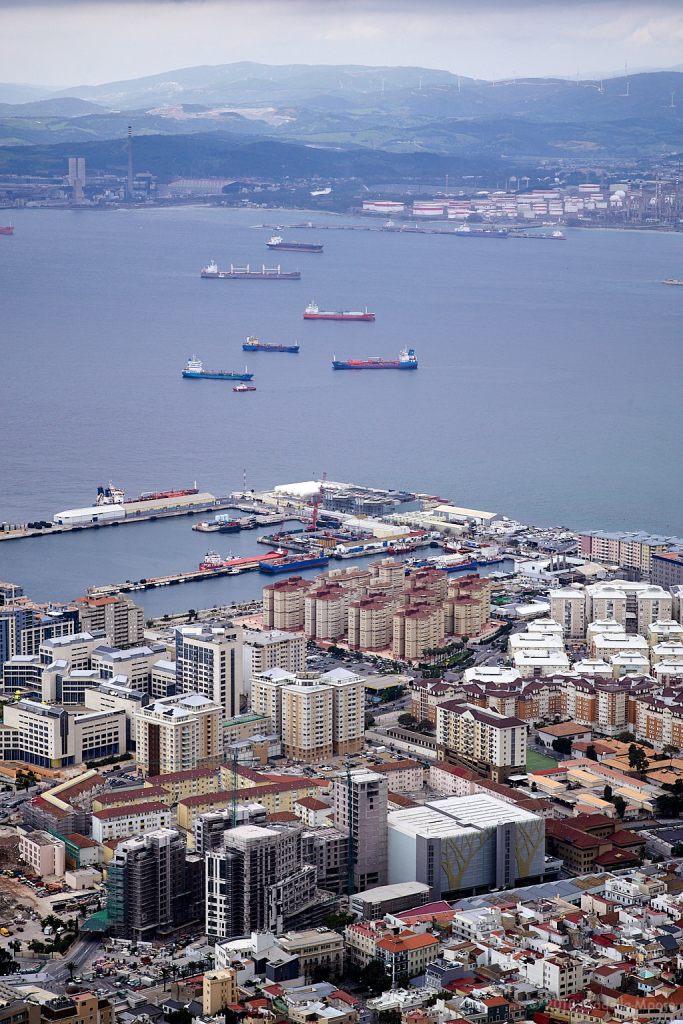 The centre of Gibraltar, with a view across the bay to Algeciras in Spain.

Gibraltar’s official designation is as a British Overseas Territory, a relic of the days of the British Empire that is usually reserved for former colonies that have not yet sought or won independence from the UK. Today, the region has its own parliament, with an elected Chief Minister rather than an appointed governor. And while the territory does not send MPs to Westminster, it is also officially part of the European Union where – somewhat bizarrely – it forms part of the South West England European Parliamentary Constituency.

British, Gibraltarian and European flags – at least for now.

Historically, Gibraltar’s primary purpose was to establish a British military presence at the strategically important entrance to the Mediterranean. The area came under British control following a military takeover during the Spanish War of Succession, after which it was formally ceeded to the UK by the Treaty of Utrecht. The original treaty ceded only the town of Gibraltar and its rather ambiguously defined associated fortifications, but today the scope of the territory has increased significantly, and it now encompasses the entire peninsula and most of the isthmus that connects with Spain.

Much of this expansion has happened during periods of turmoil in Spain and with disputed legality – not least the area on which Gibraltar’s airport was built and which was occupied during the chaos of the Spanish Civil War.

Spain has long since objected to the existence of Gibraltar. Reclamation of the territory has long been an aim, and was official policy pursued by the Franco dictatorship. It remains a foreign policy aim today.

This is bitterly opposed by the local population, who see themselves as primarily British rather than Spanish. Gibraltar boasts some of the most proudly nationalistic pubs that I have seen, draped with union jacks and serving warm beer with which to watch the afternoon UK football broadcast live on TV. Everything from the architecture to the street furniture makes the town look not unlike a small piece of London that was somehow dropped in to the Mediterranean sun.

The result is a seemingly irreconcilable clash between Spain’s right to territorial integrity, and the rights of the people who have now lived on the rock for several hundred years.

UK Red Phone Boxes, Gibraltar – although today these are strictly for the tourists!

Franco closed the border between Spain and Gibraltar in 1969, and it was not reopened until the 1980’s as part of the concessions that Spain had to make prior to joining the European Union – an early example of how the EU can help resolve national disputes by providing a supra-national political, legal and cultural framework. As with the problematic situation in Ireland, the EU works to strengthen ties between areas of conflict, and when clashes occur it provides an overarching legal framework that transcends local politics and through which disputes can be resolved.

The status of Gibraltar remains disputed by Spain, and in recent years there have been further attempts to put pressure on the region via “soft” measures such as increased security checks that resulted in massive queues and many hours of delay for anyone or any goods crossing the border. The most recent problems were the result of a disputed construction of an artificial reef, and were ultimately resolved with the support of the EU. While many of the people that I spoke to were critical of how slow the response was, Brexit will inevitably mean the loss of all such protection in the future.

The municipal rubbish dump, Gibraltar. Gibraltar’s limited size and high population density mean that everything from the food supply to waste handling is heavily dependent on Spanish service providers.

Many in the UK today will doubtless ask “so what if the border between Spain and Gibraltar is closed: is this not what taking back control means?”

Modern Gibraltar bears little relation to its historical origins. The British military presence still plays a strong role, but today’s economy is mainly based around services to shipping, tourism and financial services – the latter being the seemingly inevitable fate of small regions such as Andorra, Monaco, the Isle of Man, and many others.

Gibraltar’s controversial reputation as a tax haven results from its low or non-existent tax rates. On the main high street there are numerous shop windows full of discount tobacco, alcohol and consumer electronics shops, attracting a bustling trade with Spanish day trippers and the tourists that fly from London or Manchester. Less visible are the effects of the extremely low corporate tax rates, which attract financial entities and also a significant online gambling industry which has grown largely thanks to the low-tax, low-regulation environment.

Despite this, Gibraltar is very far from the luxury playgrounds usually associated with Mediterranean tax shelters, and most of the wealth that is visible is the largely result of its recent economic boom.

Old military and 1960’s concrete apartment blocks are being swept away by a construction rush that is erecting luxury housing and office blocks that would not look out of place in London’s financial district.

Gibraltar boasts one of the lowest unemployment rates in Europe: just 3%. This is in stark contrast to the 35% unemployment just over the border in the deeply troubled town of La Linea de la Concepción, where the combination of economic collapse and the proximity to Morocco has led to the area becoming one of the hotspots where dugs enter Europe.

Much of Gibraltar’s growth has been and is occurring thanks to the stability that the EU has brought and the facilitation of travel from the UK that resulted from the lifting of barriers to commercial flights in 2006. Today, the airport is the primary connection for a surging tourist industry that the Government of Gibraltar estimates is worth more than £200m every year.

This rapid growth has meant that Gibraltar lacks sufficient workers to staff its rapid expansion. Thanks to European free movement, there are currently more than 10000 migrant workers who cross the border daily, employed everywhere from bars to construction sites, and bringing much needed respite to the economically deprived areas beyond the border. The scale of this is all the more astonishing when you realise that the total resident population of Gibraltar is itself only scarcely more than 30000 people.

The result is a strong and growing interdependency between Gibraltar and the surrounding region. Gibraltar relies on the Spanish mainland for everything from food and building materials to the disposal of refuse, and any disruption of the smooth flow of traffic across the border threatens the viability of the territory. Equally, the neighbouring areas in Spain have become economically dependent on Gibraltar.

The only road between Gibraltar and Spain crosses the airports sole runway, which was built directly alongside the border.

This interdependency has forged in an improbable bond between Spain and Gibraltar that seems at odds both with the region’s confrontational politics and also with the often justified stereotype of British citizens abroad. Today, those British pubs sit next to genuine Spanish tapas bars, and people chat in Spanish about the latest stories in their copy of the London Times. Fascinatingly, there is even a unique dialect that is emerging, Llanito, that is predominantly a hybridisation of Andalusian Spanish and British English.

Many people whose lives may be profoundly affected by Brexit seem, to an outsider, surprisingly unaware of just how strong these dependencies and cultural connections are. The most frequent comment that I heard from the migrant workers was a hope that Brexit would be completed soon so that Sterling could rise, thereby giving a boost to their income in Euros. Most of these workers are too young to remember the effects of the border closure under Franco and it is clear that many people find the problems of Brexit difficult or pointless to understand.

Mosque, Europa Point. Gibraltar’s position at the entrance to the Mediterranean means that it is home to many ethnic and cultural groups.

There is also a strong sense of powerlessness in the people that I spoke to, and an acceptance that whatever happens can not be stopped. This is perhaps unsurprising when 96% of Gibraltar’s population voted against Brexit yet they find it being imposed on them from the UK.

The Threat to Sovereignty

At the time of writing, Spain has indicated that it hopes to reach a bilateral agreement with the UK over Gibraltar before the October 2018 deadline for the EU exit agreement. This agreement will only cover the exit and transition issues: expect further diplomatic tussles when it comes to agreeing any future political and economic relationships with the EU, none of which will have been resolved prior to the UK’s exit.

The Spanish spokesman commented that they did not want to hold the UK negotiations hostage to any dispute over Gibraltar – most likely a reflection of political reality in Brussels and the European Parliament than a choice from Spain. The probable agreement will likely result in joint sovereignty over the airport, greater border controls to combat smuggling, and greater sharing of fiscal data to avoid tax evasion.

Some people regard this as a successful outcome for Gibraltar, but it is important to understand that many politicians in Spain see this not as an end point but simply one more step on the way to recovering full control over the territory. Such a drastic stance could not work today because, aside from international political considerations, the change would be economically devastating. Rather than a sudden transition, it is much more likely that a Gibraltar that is outside of the EU will see many years of pressure that gradually whittle away control.

It is also unrealistic to expect the UK to come to Gibraltar’s aid if that means political sacrifice in London. The UK has consistently failed to support those most affected by Brexit, and who form what seem to be perceived as largely irrelevant electoral minorities. This was seen clearly with the loss of democratic rights in the referendum for UK nationals that are resident in the EU, and in the general failure of the UK in negotiations to standup for the rights of UK emigrants (most significantly affecting the right of free movement, which will directly harm many people’s ability to work in the EU post Brexit). We have also seen this extensively with the cavalier attitude to the border in Ireland, where the imposition of controls risks a return to the violence that was resolved only with the assistance of the EU in the Good Friday agreement.

The leading proponents of Brexit who argue that it is about “taking back control” and “restoring British sovereignty” should be made to visit Gibraltar, where you can clearly see that Brexit threatens precisely the opposite.

After 300 years and with the imminent arrival of a debilitated, inward-looking post-Brexit Britain, Spain can afford to move slowly and carefully.

Unless Brexit is stopped, it will not be the 29th March 2019 that should worry Gibraltar, but the decades that will follow.