Another set of images from the ongoing Catalan independence protest.

Following the elections in December, the Catalan parliament was returned with essentially the same political makeup: a small majority of pro-independence representatives elected from slightly less than 50% of the popular vote thanks to Catalunya’s weighted voting system in which a rural vote can carry up to 2.5x the weight of a vote cast in Barcelona.

Carles Puigdemont is currently subject to a Spanish arrest warrant resulting from his attempt to lead a unilateral declaration of independence for Catalunya, in defiance of both Spanish and Catalan constitutional law. To avoid arrest, he fled to Belgium where he has established himself as a fugitive figure-head to the independence movement – while also being simultaneously elected to the new Catalan parliament and remaining the head of his former party.

The secessionists in the  new Catalan government want to re-appoint Puigdemont as president – a deeply symbolic move that would be seen as a show of strength against the Spanish authorities. Curiously, while the fugitive from justice can apparently secure a seat in parliament, to be appointed as president he must appear in person for the swearing-in ceremony. But any such appearance would undoubtably result in his arrest, and simply ignoring the constitutional requirements would likely result in direct intervention again from Madrid to dissolve parliament under Article 155.

On 30th of January it was strongly suggested that a presidential inauguration would occur, and that Puigdemont would somehow be smuggled in to the Parliament building. In support of this, mass protests were organised by the independence movement in a Spartacus-like form where people were to all wear cardboard masks with a photograph of Puigdemont in order to create as much chaos and confusion as possible.

The public park surrounding the Parliament buildings was closed and chained shut for the parliamentary session, with the Catalan Police (Mossos d’Esquadra) monitoring the entrances. Video screens were erected outside of the park, showing pro-independence propaganda ahead of the planned ceremony.

However, a handful of police and what looked like 1€ store chains and padlocks are not a sufficient deterrent when there are several thousand protesters outside. The result was people climbing over and breaking down the gates to enter the park in large numbers: 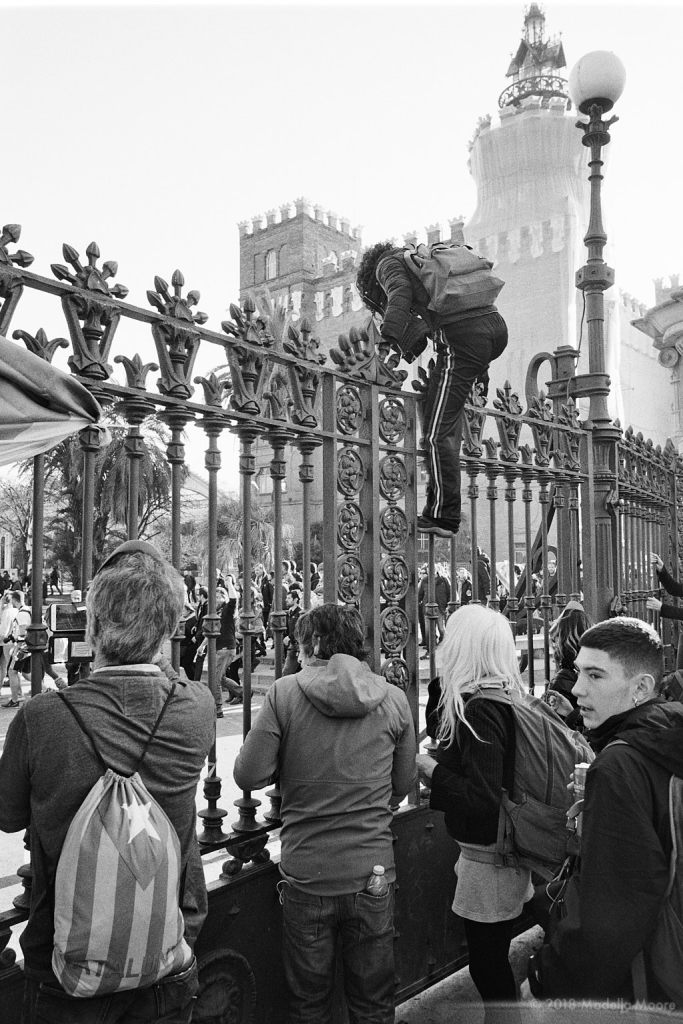 And as always, fuelled by the army of illegal street sellers selling a mix of alcohol and independence flags: 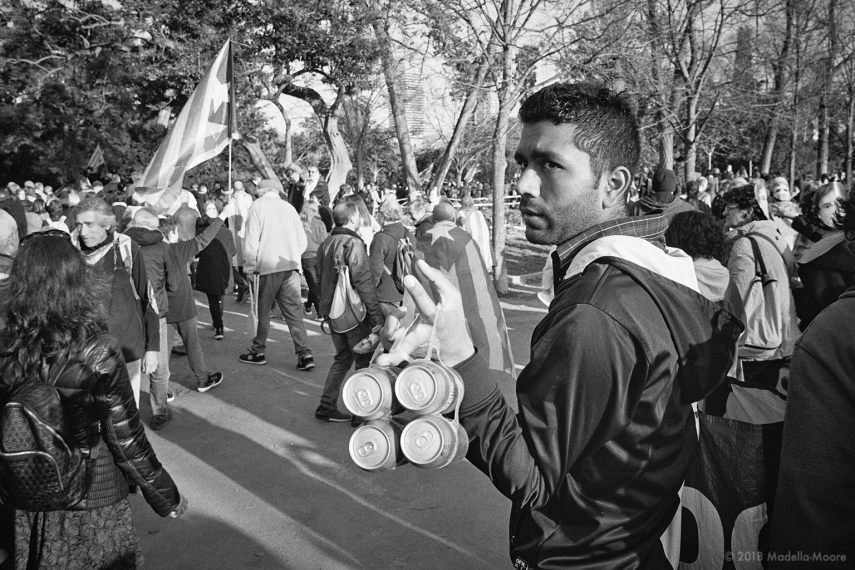 The crowd eventually made their way to the Parliament buildings, where the police had fallen back and sealed the entrances. With the chaos outside, it was clear that no inauguration would be possible.

The crowds eventually dispersed, with the last hard-core protesters giving up around 10pm after the police threatened to arrest two of them.

Meanwhile Puigdemont remains in self-imposed exile in Belgium. There are frequent sketchy rumours about establishing a government or president “in exile”, puppeting a constitutionally legal government in Catalunya. But as yet these remain rumours – and Catalunya remains without a functioning government.

As the sign says, is this the democracy that we want? What is happening today in Catalunya is nationalism backed by populist propaganda – not democracy.

As usual, all photographs were taken with the M7 and 28mm Summicron on Ilford Delta 400. The low sun was particularly a problem with many of these shots, where the rangefinder makes it impossible to judge flare.