Annotations in Capture One Pro 11.

This is a brief review of Capture One Pro 11, the latest update to Phase One’s alternative to Adobe Lightroom.

The key new features are:

This is a pretty slim list, which is why this is only a brief review…

Capture One has long since supported a layer-based model for local edits, and this has a number of enhancements in Capture One Pro 11:

The layer system remains limited to localised image adjustments and simple cloning/healing operations. This provides significantly more flexibility than software such as Lightroom, although it is not a substitute for more flexible software such as Photoshop or Affinity Photo.

Capture One 11 now allows almost all image adjustments to be applied through a layer mask. The exceptions are mainly functions which only make sense globally, such as vignetting. However, I was slightly disappointed to find that it is still not possible to apply the black-and-white colour mixer settings locally, which would allow for some interesting effects such as simulating a graduated colour-contrast filter (although you can approximate this by applying  the colour balance tool locally on a layer, prior to the black-and-white conversion).

The following example shows a rough edit of a landscape image to address difficult exposure.

This is the original image, which has some promising light but far too much contrast as shot:

The original image, after import and auto-adjustments have been applied.

Layers were added for the sky and different areas of the mountains, to lift the shadow areas and adjust the contrast, clarity and white balance.

The sky layer was particularly difficult due to the tree line, but fortunately, the new “refine mask” option (hidden under the three-dots menu on the Layers tool) helps simplify the task. It uses an edge detection technique to identify boundaries in the image, adjusting the mask accordingly.

The algorithm is not perfect and getting a good edge requires some experimentation and iteration. However, it does make it possible to get a reasonable result on even quite complex areas without needing to laboriously trace every single detail by hand. 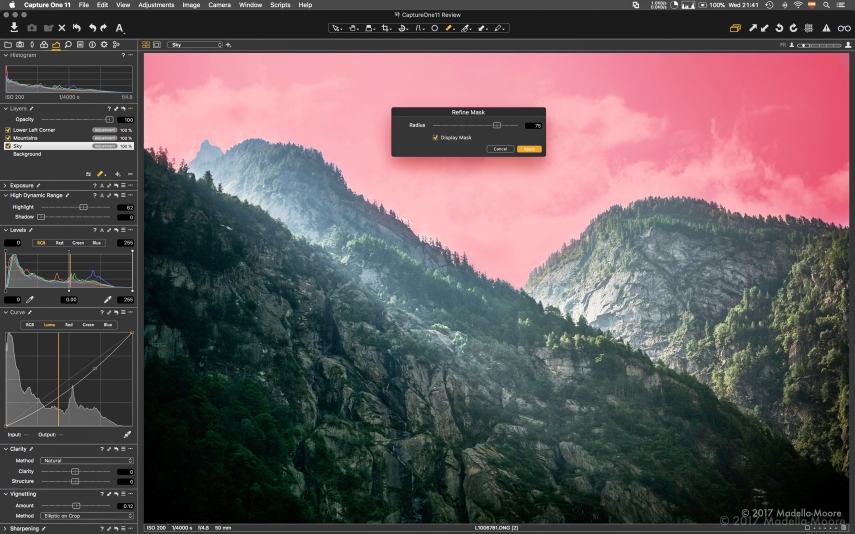 Editing the mask (highlighted in red) for the sky adjustment layer. The new refine and feather-mask commands make it easier fit the mask to fine details such as the tree-line here.

Another helpful addition is the ability to show the masks in high-contrast black-and-white. This makes any errors in the mask drawing more apparent, as you can see here: 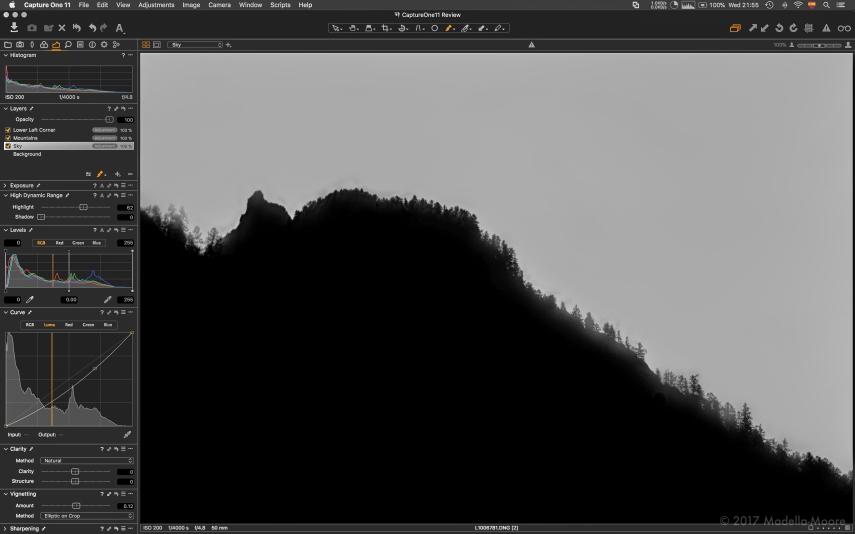 Showing the sky layer mask using the “monochrome” display option. This is helpful for catching any holes in large areas that might have been missed when creating the mask.

The final image makes use of four layers, using different curves and colour edits for the sky, sunlit-areas, and shadows. The new colour tools were used gratuitously to warm the colours of the shadow areas a little.

While my editing choices leave much to be desired, Capture One 11 allows almost any image adjustment to be applied locally with comparative ease and speed.

The final result. Ok, so I am most definitely not a landscape photographer, but this was really just an excuse to play with the new layer tools ;-)

Annotations allow free-hand line drawings to be overlaid on an image, with the intention of providing instructions to someone else for subsequent retouching or commentary on an image:

Annotations are one of the few new features in a release largely devoid of major additions that will benefit most photographers.

If the image is exported as a Photoshop document, the annotations can be added on their own layer so that a single file can contain both instructions and the raw image data.

The functionality is basic: a simple paint-program, with selectable brush size and some fixed colours. There is no ability to enter text directly, so any written instructions must be made free-hand.

It works just fine, but it is not something that I (nor likely many working photographers) are likely to use in practise.

The most dramatic performance improvement for me has been the increase in speed when working with large catalogs.

Under Capture One 10, selecting an album with thousands of images was an incredibly slow process – taking a minute or more from clicking the album to finally displaying its content. This made working with large catalogs almost impossible, even with the catalog and image data stored on fast local flash drives. The newer software now cuts this delay to a tolerable maximum of around five seconds, and while it is good that this has improved, it is very disappointing that such a crippling usability issue introduced with CO10 will only be fixed for users if they purchase a paid upgrade.

The second most obvious performance improvement is with mask editing. Creating a mask using a Wacom tablet is much smoother and more fluid than in older versions of the software, even on my relatively slow four year old laptop. 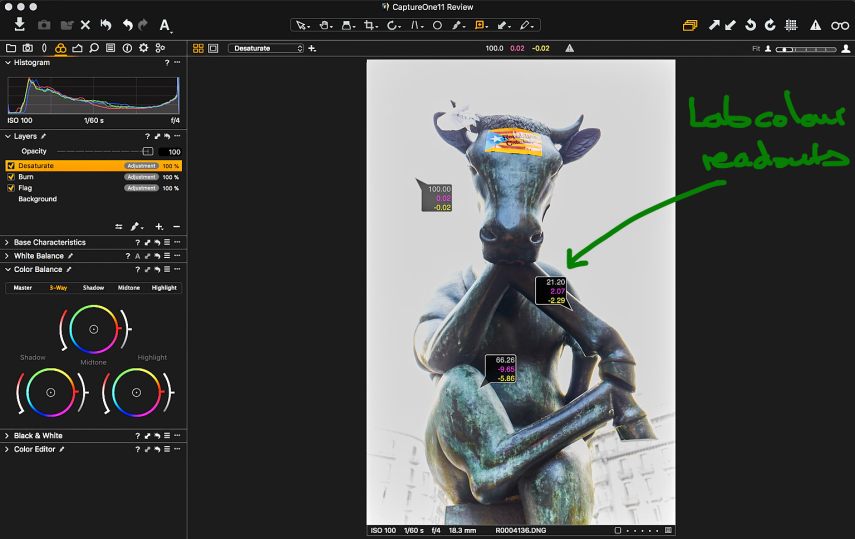 Capture One 11 adds support for Lab Colour readouts. These are measurement points that can be added to an image and which display the colour content at a given point, and which were previously supported only for RGB display. Lab Colour is a generic colour space that supports all possible colours, exceeding the gamut of spaces such as sRGB or ProPhoto. The three figures reported are the luminance and the two chrominance values.

This may be useful when a high level of colour accuracy is required along with CMYK output – although it is not something that I am likely to use myself.

The software has various other minor improvements, most notably the ability to exclude duplicate images when importing files and the ability to export watermarks as layers in Photoshop documents. Handling of Photoshop native files is also much improved over older versions.

There are also newly supported cameras, and many new lens correction profiles (most notably for Leica M series cameras). However, Capture One continues to avoid adding support for any  medium format cameras that might compete with Phase One’s own hardware, such as the new Fuji GFX 50s or Hasselbald X1D.

Capture One remains possibly the best RAW developer currently on the market. It gives sharper, cleaner results than Adobe RAW, and images need less “tweaking” to get a good result. It is also one of the few options available if you refuse to get drawn in to the now mandatory subscription model pushed by some vendors.

For owners of Capture One 9 or 10, is it worth the 99€ + VAT upgrade cost? Unless you need support for a specific camera/lens, perhaps not. Many of the headline new features added in CO11 (and also CO10) may be useful to large agencies, but are much less likely to be useful to the average user.

The update feels more like a maintenance release than a major update: it lacks any clear must-have killer change that will radically improve most users work.

From a personal perspective, the extensions to the layer tools are useful, even if the new functionality is likely to be used on only a very few images. However, I can not help but wonder how much more attractive this update would have been if Phase One had chosen to address some of the more significant limitations of the software, such as the DAM functions, the noise reduction tool, and even simple things such as providing more flexible vignetting options.

El Brau Pensador (the thinking bull) – Sculpture by Josep Granyer, Rambla de Catalunya, Barcelona. Several layers were used to burn and de-saturate the background in CaptureOne 11, and to tune the colour of the independence flag.