These are a short series of images taken around the cruise-ship terminal in Barcelona. They were taken using a mixture of Fuji Superia 200 and Ilford XP2 Super 400 films, both using the standard C41 process. The Ilford is interesting in that it is a black-and-white dye-based film, rather than traditional silver-halide.

The first two shots were taken at ISO 200 using the Fuji, scanned using Vuescan and a PlusTek 7600i, and then converted in to black and white in Lightroom. A virtual red filter was applied in post-processing to help darken the sky.

The results are quite good, coming out with relatively high resolution and fine grain – and with the bonus of being able to emulate pretty much any colour/contrast filter in post processing.

Unfortunately I can not say the same for the pictures taken with Ilford XP2 Super 400, which are much much grainier:

The Ilford shots were taken using an actual deep-red filter (B+W 091) to darken the sky. The grain in the resulting images is clearly visible even at web sizes.

This is an example 100% crop of one of the above images (click for larger):

When I first saw this, I assumed that there was a problem with the film scanning, but in fact, this is the actual film grain and you can even resolve individual grains when scanning at 3600 dpi or higher. They are about 0.015mm in diameter, and look very much like irregular blogs of dye. The effective resolution for the whole image is disappointingly low: equivalent to about 3-6 megapixels, depending on how you compare.

One thing that would have helped here would probably have been to over-expose the XP2 by 1 or 2 stops. Looking at some areas of higher or lower exposure in the images suggest that this would probably reduce the contrast between grains, but probably not significantly change their size. The film seems to be very good at preserving highlight information, so in practice it might better to regard this as an ISO 200 film rather than ISO 400…

Ilford XP2 is useful if either your local photo lab can not process traditional silver-halide films, or if you want to keep the cost of developing down. However, unless you are going to print directly from the negatives, it is difficult to find a good reason to recommend this over a cheaper colour film combined with a black-and-white conversion after digitisation. 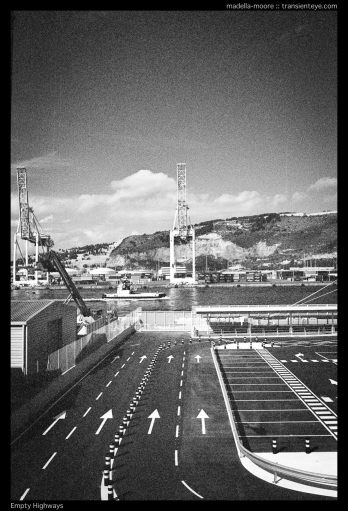 While many people really like the appearance of grain, for these types of subject I think less grain is better. Grain works well when mixed with organic textures (such as wood or fabric), where it can create a impression of  higher resolution. However, finding grain where I expect to see a smooth sky has, for me, the opposite effect.