“We are a Republic. Expel the occupying forces.”

Following the white protest on Saturday, there has been a subsequent unity march through the city centre, and then a gathering to celebrate what was expected to be a formal declaration of independence for Catalunya. However, the secessionists were bitterly disappointed by President Puigdemont’s actual speech.

The pro-unionist march comprised tens of thousands of people marching with both Catalan and Spanish flags to reject the Catalan government’s aim of declaring secession from Spain. This was one of the first properly resourced events to fight the independence movement, organised by the group Societat Civil Catalana under the slogan “Prou! Recuperem el seny” (roughly translating as “Enough! Let’s recover sanity.”).

Unity march, Barcelona. Despite the media noise, the reality is that supporters of Catalan independence are likely a minority in the region.

On Tuesday 10th October, the president of the Generalitat de Catalunya, Carles Puigdemont was scheduled to convene the parliament and give a speech on the political consequences of the disputed vote. This was widely expected to be a formal declaration of independence, consistent with previous statements that such a declaration would be forthcoming within 48 hours of ratification of the referendum result. For the speech, the area around the parliament was sealed by the police, while large giant video screens were erected in Passeig de Lluis Companys and thousands of independence supporters gathered to view a live broadcast of the historic proceeding.

Protesters on the steps outside of the Supreme Court, Barcelona awaiting Puigdemont’s speech. The supreme court is unpopular with the separatists because it has been the primary source of (constitutional) legal rulings against the secessionist process.

But the speech that was delivered was neither expected nor wanted by those watching.

Puigdemont declared what some have called “Schrödinger‘s Independence”: both declaring independence and then immediately suspending its effects “for dialogue”. Simultaneously independent, and not.

The reality is that proceeding with unilateral independence is completely unfeasible. Setting aside Spain’s response, the international community has made it clear that an independent Catalunya would be outside of the EU, and most major trading partners (including France, Italy and the UK), have stated that they will not recognise the region. Companies, nervous about the political situation, have been hastily relocating their legal headquarters away from Catalunya – with more than 500 having declared such a move at the time of writing, including major banks, biotech and publishing companies. There are also signs of an severe impact on the tourist industry, with forward hotel bookings in Barcelona falling 30%.

The coalition Catalan government is highly unstable, combining factions from the extreme anti-capitalist left (CUP) to the right wing PDeCat. These factions are united only by the goal of independence, and the looming economic implications are opening fault-lines within both the political groups and also the non-governmental organisations that have been driving the independence process from behind the scenes (ANC and Òmnium). CUP’s radical politics are particularly extreme, and they are demanding that Puigdemont proceed immediately with independence “for the dignity of the people“, regardless of the economic consequence. 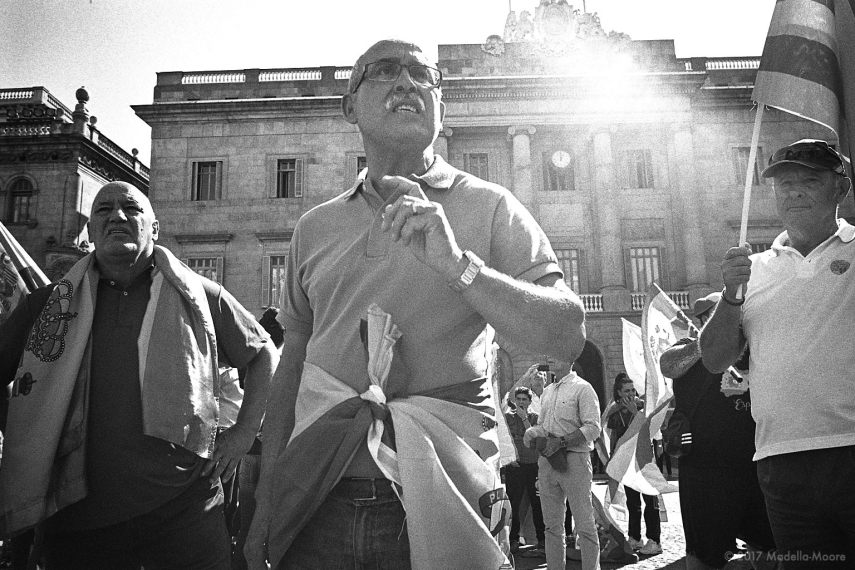 Spanish nationalist protesting against the secessionists, Plaça Jaume Primero, Barcelona. Nationalist sentiments are being every more deeply entrenched on both sides.

Ironically, while Catalunya falls in to political disarray, the political parties in Madrid are showing a rare moment of unity. In return for a promise of future constitutional reform, the left wing PSOE is supporting the PP in taking a hard line on Catalunya and demanding a return to constitutional legality. The Spanish government has issued a demand for Puigdemont to clarify whether or not his somewhat ambiguous speech has indeed formally declared Catalunya as independent, with a reply required by 10am Monday. If the reply is unclear or if it indicates that the Catalan government is in violation of the Spanish constitution, “Article 155” will be invoked – suspending autonomous rule in the region until a new regional government can be elected. Such a move will dramatically escalate the nationalist tensions here, potentially resulting in civil unrest, and certainly deepening the social and political divide that has lead to this crisis in the first place.

All of this is taking place in an increasingly bitter and difficult environment. Reporters Sans Frontières just released a damning report (PDF) on press freedom and threats in Catalunya, while former Guardian editor Peter Preston has noted the exaggeration of news events on social media and which are often reported without proper fact checking.

Piles of professionally produced posters to provide pro-independence propaganda for the media, Passeig de Lluis Companys, Barcelona. These posters were produced by Òmnium – supposedly a language and cultural organisation, but which has been extremely active in the independence movement. 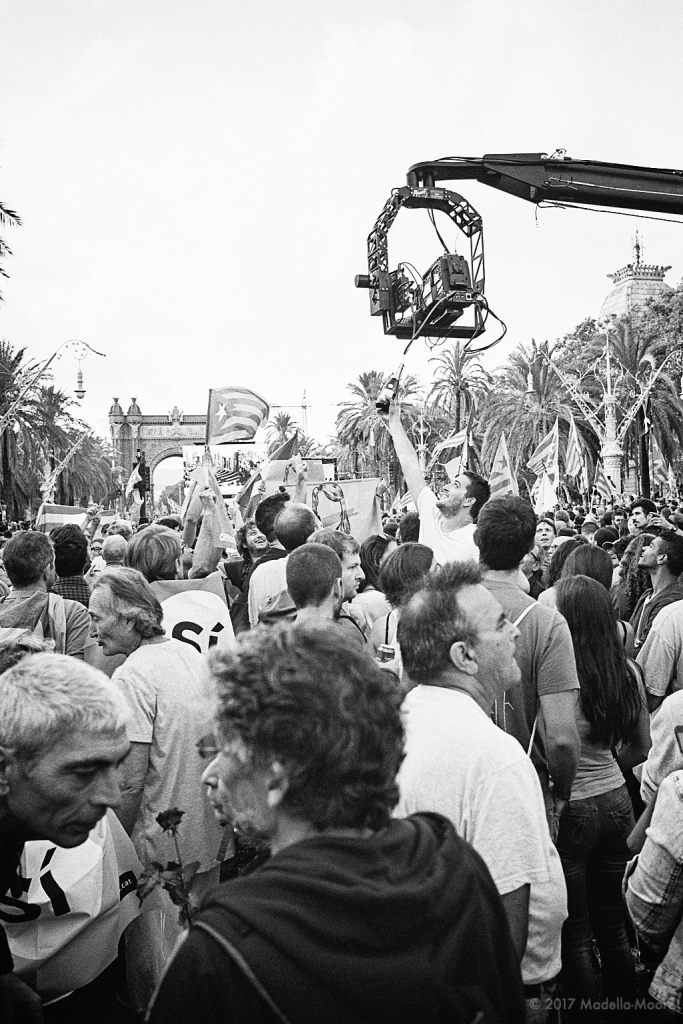 The crowds and media gathered in anticipation of Puigedemont’s expected declaration of independence. They were sorely disappointed by the actual announcement. These events are astonishingly well financed, with a highly professional media campaign which many regard as a successful source of pro-independence propaganda. 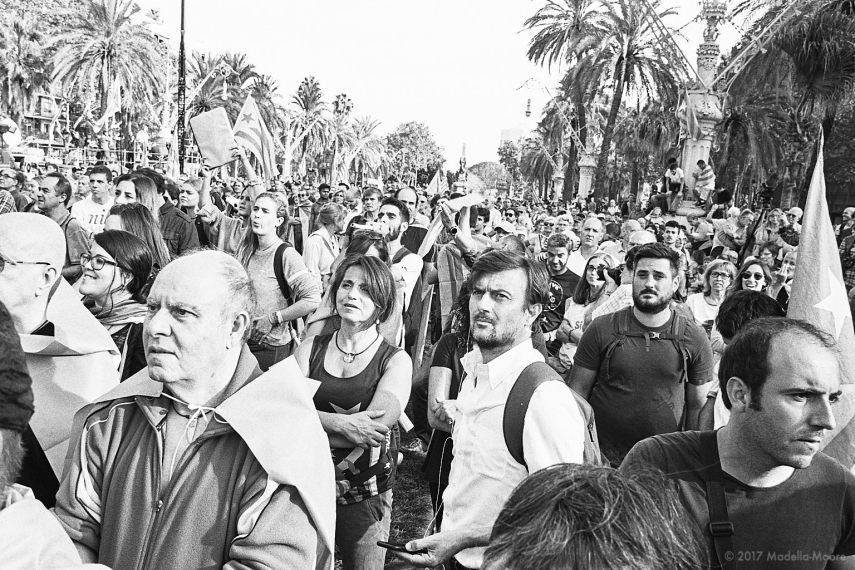 Photographically, this is a fascinating time to be in Barcelona. But at the same time it is deeply distressing and saddening to watch extreme nationalism inflicting deep and near irreversible damage to Catalan society.

All images were taken, as usual, with the Leica M7 and 28mm Summicron lens using Ilford Delta 400 film that was processed at home in ID-11.