Five loosely connected images taken around the centre of Barcelona.

In reality, this law is primarily designed to protect the interests of the politician, not the citizen. It was introduced to protect the governing Partido Popular in the face of the indignados protests in Madrid, and the heavy handed police responses to these. There were many reasons for these protests, but one of the strongest was the reaction to the exposed financial corruption in government and the Spanish banking system. Rather than address the core motivations for the protests, the PP chose to respond by criminalising them.

The law provides for fines of hundreds of euros simply for photographing or otherwise disparaging the police, rising to an astonishing  600.000€ for organising events “prohibited by the authorities”. This law is already causing controversy, such as for one woman who was fined 800€ for posting online a photograph of a police car left illegally in a handicapped parking space. Even more absurdly, one person is being fined 600€ for using a bag with the logo “All Cats are Beautiful” after this was deemed an “insult to the police”. These are not isolated examples, with ministry data indicating that roughly 30 people every day are fined for disrespecting the authorities. Nor is this a law disconnected from everyday life – I have photographs that I have not published because they show the police in dereliction of duty and which are now illegal in Spain.

The 2008 financial crisis has resulted in a dramatic right-wing shift in politics across all of Europe. It is deeply unsettling to see Spain lurching backwards to the Franco era, the rise of the Front Nacional in France, the astonishing politics in Hungary and Poland, the appalling handling of the Greek crisis, the rise of the extreme right in Austria, and not least the UK’s attempts to instigate mass surveillance and withdraw from the European Convention on Human Rights.

Laws like the Ley Mordaza are designed to secure political power by taking away the right to protest or to challenge abuses of the system. Such laws have no place in any modern democracy.

Fortunately, this law is currently being contested via the European Convention on Human Rights, which at least for now is still in effect here. 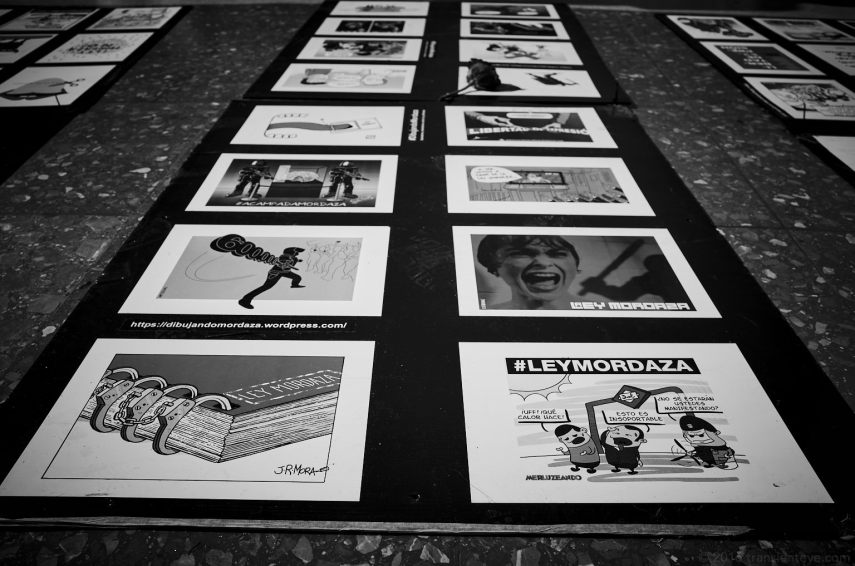